Media managers in Germany draw hope from a new survey by Bitkom, an IT industry association, which says that a quarter of Germans are now paying for journalistic content online. On average, these readers spend 13.60 euros per month, about $18 at the current rate. Trouble is, almost 2 out of 3 Germans categorically told the pollsters, “No, thanks” when asked about paying for news on the Web. The majority feels that there are plenty of free alternatives. Other reasons for not paying are lack of quality, price, and billing issues.

Arguably, in any other industry this would be seen as bad news: if two thirds of your potential customers are unwilling to even consider paying for your product, clearly there’s a problem. Instead, traditional media celebrate the fact that “more and more readers are willing to pay for news online.” 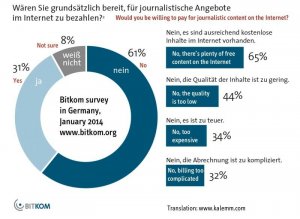 I remain skeptical. Even if more and more media outlets start putting up paywalls, there’s typically no reason why consumers need to reach for their wallets. News is ubiquitous these days, the essence of anything that’s happened can be found all over the digital world with little effort in mere seconds.

The real challenge isn’t access to a limited supply of news – it’s too much news, an overwhelming amount of information. Of course, that’s seeing the problem from customers’ perspective – while most (traditional) media companies prefer to keep looking at it from their own perspective: “Where’s the money?”

Ultimately, I’m sure, these two needs will align and there will be money in digital journalism – but this will require a radical rethinking of business models, completely new media products, and a lot of creativity. Far more than simply putting up a paywall.